According to a background report for the Finnish Economic Policy Council, lump-sum transfers are better at improving the equity of fuel taxation compared to reductions in income or fuel taxes. Tax reductions would disproportionately benefit high-income households. Furthermore, reductions in fuel taxes could create harmful incentives to increase driving.

Excise taxes on fuels are the most effective way to mitigate road transport emissions in Finland, as they create continuous incentives to reduce annual mileage. However, the burden of the tax is higher on low-income car-owning households. The new background report for the Economic Policy Council analyses various models of compensation. The report is written by doctoral researcher Selina Clarke and the empirical analysis conducted by researcher Kimmo Palanne.

“To sum it up, a lump-sum transfer would compensate costs to low-income households, while not encouraging more driving,” says Clarke. 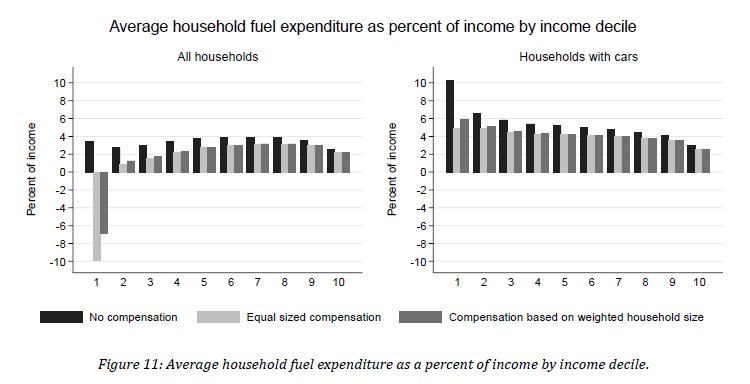 Compensation can effectively even out differences in tax burdens between income deciles. A lump-sum transfer is the most effective way to reduce the burden of taxation in the lowest income deciles. Furthermore, lump-sum transfers are expected to generate fewer environmentally harmful incentives compared to, for example, reductions in fuel taxes. The latter would make driving relatively cheaper.

“As an example of the lump-sum transfer, households in some Canadian provinces receive a state tax refund four times per year. The refund is paid from the province's carbon dioxide tax revenue,” says Palanne.

The analysis utilises the Finnish Transport Safety Agency Traficom’s data (2016) to determine vehicle owners and each car’s annual distance driven in kilometres. Secondly, using Statistics Finland’s FOLK-dataset, it was possible to assign car owners to households and calculate each household’s total fuel costs and their ratio to household disposable income. In 2016, a total of €1,295 million petrol excise taxes and €1,362 million diesel excise taxes were collected. The estimated revenue from the carbon tax components was 809.7 million euros. The tax refunds modeled in the report are based on distributing this carbon tax revenue.

The Council publishes an annual report for 2022 evaluating recent economic policy decisions on Wednesday February 1st. Green transition is one of the of the topics of the report seminar.