Municipal mergers did not bring savings but affected the service networks

The municipal mergers which came to effect in 2009 did not affect total municipal expenditures. However, major changes have occurred in the service networks of the merged municipalities, as social and health care jobs were moved away from the smaller municipalities to the largest municipalities in the mergers.

A total of 32 municipal mergers involving 99 municipalities were implemented at the start of 2009. According to a recent study by Tuukka Saarimaa and Janne Tukiainen from the VATT Institute of Economic Research and Oskari Harjunen from the Executive Office of the City of Helsinki, in the subsequent six years after the merger, expenditures of the merged municipalities developed almost identically to expenditures of the control municipalities that were not involved in a merger (see Figure 1). This indicates that the municipal mergers did not meet the savings targets set out for them. 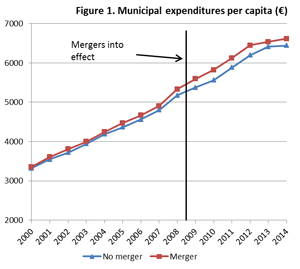 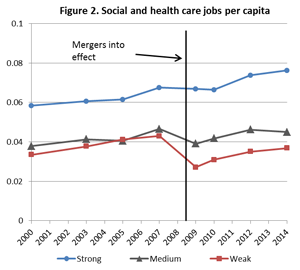 “Political representation can have significant effects on the regional services. The results of our study concerning the importance of regional representation should also be taken into account in the preparation of the reform of county government and county elections,” says Janne Tukiainen.

The trend of increasing heterogeneity was also observed in the number of administrative jobs in municipalities. On the other hand, the mergers did not affect the location of schools or jobs in the education sector.

The increasing heterogeneity in social and health care services was not reflected in the indicators measuring the overall wellbeing of the local residents, such as house prices or migration. “This somewhat surprising result could be explained by the fact that although the social and health care services of smaller municipalities were moved further away, the services are now available in larger and perhaps higher quality units. In addition, the mergers did not affect the accessibility of services used on a daily basis, such as the location of schools,” according to Tuukka Saarimaa.

The study used the municipal statistics of Statistics Finland and the Community Structure Database (250 m x 250 m grids) in the mapping of the location of jobs in different sectors. This allowed analysing the development of employment relative to the old municipal borders before and after the mergers. The authors also used address details of council members to investigate the seat shares in the new councils relative to the old municipal borders.